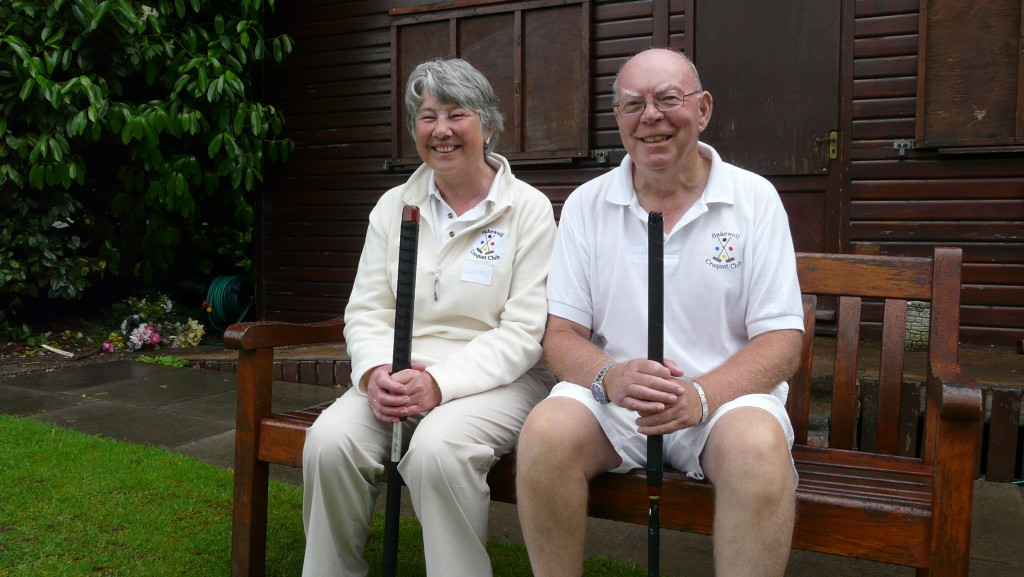 The tournament was open to all qualifying players within England and had a starting line-up of twenty-four hopefuls. Both Dorothy and Mike topped their group matches in the morning and went on to win their semi-finals to set up an all Bakewell clash for the final. It was a tense game with the lead changing hands throughout the match and Dorothy running out the winner on the last and deciding hoop with a score of 7-6.

After the final Dorothy said, “It was a tense match and at times I thought that I had lost it, but I got a good position on the last hoop and managed to score”.

Mike commented, “It was a very close match all the way through that could have gone either way.  It was great to be part a match that was so close, Dorothy just got the advantage at the last hoop and so deserved to win”.

This is the first year in which this tournament has been run and so Dorothy will be the first name to be engraved on the base of the cup, which will be competed for again next year.

Alan Reeves, Chairman of the Bakewell club remarked, “This is the first time that any club member has entered an external competition and we are all delighted that Dorothy won, although sorry that Mike had to lose”.

Alan went on, “I think that this win really puts us on the map as a club and I encourage anyone who has an interest in a game of skill and tactics to either contact me or come along to one of our club sessions. We provide all the equipment and have qualified coaches to give tuition and guidance”.

You might have missed it – what with the Olympics and European Cup, but Bakewell Croquet Club played Southwell Croquet Club in a return ‘friendly’ match on Sunday, 10th June. The weather nearly forced us to cancel but it turned out to be a lovely day after two weeks of rain.

We fielded a team of six to five from Southwell so Billie generously offered to play for the opposition. We now have to suspect her loyalties as she played like a demon, ending the day with the best result of her new ‘team mates’, all of whom are very good players! Well done Billie!!!

Despite such treachery, Bakewell managed to sneak a close win at 116 hoops to their score of 91.

Keep an eye open for our next visit to Southwell, it really is a good day out.

A very friendly match was played at Sheffield U3A’s Parkhead venue on Friday 29th June 2012. Each club fielded a team of eight players with each team playing with every one of their team members in seven doubles games. The score being the number of hoops scored by each team

Play started at 11am under very pleasant conditions, on three very well kept lawns. It was sunny with a slight breeze and stayed fine for the duration of the first two games – then play was interrupted by a very heavy shower. An early lunch was called so no time was lost! Soon, the sun came out again, play resumed and continued for the rest of the afternoon.

The final score was a win to Bakewell with 154 hoops to Sheffield’s 114.

To complete the afternoon, the two top scorers from each side played a final game. Steve Marsh and Alan Tinker for Bakewell, against Dennis Crossland and Monica Ward for Sheffield. An exciting and close game with the Sheffield team winning the final hoop and the game 7 – 6. Finally, tea was provided by our very sociable hosts.

Our thanks go to the organisers an excellent, well-run match, and for their hospitality. 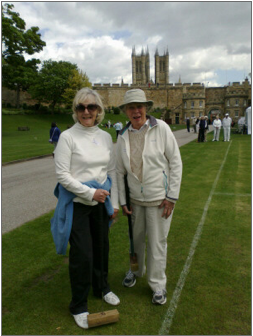 This was once again great fun and was held in beautiful weather. I really can recommend it to anyone in the future.

The duo of Furniss & Nursaw was less than dynamic – being let down by the lamentable play of Bob!! One of their more charitable opponents felt so sorry for them, she knocked three of their balls through the hoop for them. No such sentiments from the rest of the opposition though, resulting in a 4 to 2 drubbing overall.

Carol and Dorothy wasted all their lucky (?) shots in one game winning that 7:0. They should have saved some for the other five which they lost.

This left our former semi-finalists, Steve and Gill to salvage our pride – but they weren’t in the salvage business on the day!! Never-the-less, they were still the best of the bunch, winning three games out of six.

Roll on next year!!