A contingent from Bakewell Croquet Club has had another enjoyable stay in the Ripon Spa Hotel, setting themselves up for the 2017 season.

The ‘Croquet Experience’ was enjoyed by many participants on a glorious summers day at the Derbyshire Dales Bakewell Recreation Ground on the 5th June ‘National Croquet Day’.

Two full sized lawns were well presented and fully occupied throughout the day by visitors from all corners of the globe and watched by many more interested spectators.

Bakewell Croquet Club catered for over 80 players from many backgrounds and age groups ably recruited from the visiting public and refreshments were available at the pavilion for all to enjoy.

A thoroughly good experience was enjoyed by all with many ‘hooked’ on the opportunity to further their knowledge of the sport.

A croquet evening held in Ashford in the Water on 17th July where the club members offered their services and equipment helping the Rotary club raise funds for their good causes. 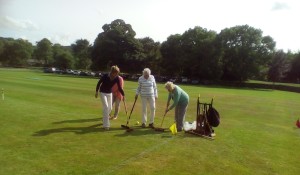 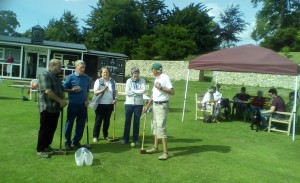 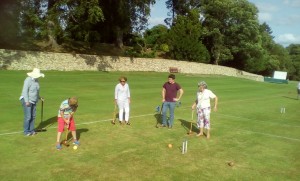 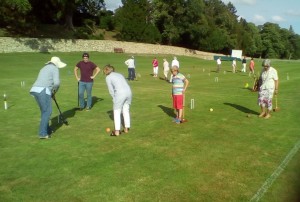 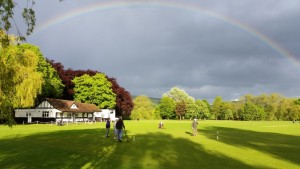 As can be seen on our calendar page the club has  a full program for the summer, in addition to the regular club sessions where we recently saw this rainbow overhead. Here are some of the things we have been doing over the last month or so. 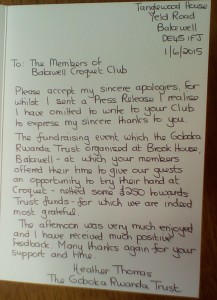 In may the club provided a croquet evening for around thirty people raising funds in aid of the Gobaka Rwanda trust, which was held in the garden of one of the trustees.  The food was delicious and the play energetic, inventive and competitive, a fun evening for a good cause.

We received a letter of thanks which can be seen on the right.

Also in May around a dozen members had an outing to the Ripon Spa hotel for a few days of socialising and games of croquet on the hotels’s championship quality lawns. The weather could have been warmer but it didn’t spoil the enjoyment.

Four afternoon sessions at Tansley school with members of the croquet club introducing the children to a form of croquet. An annual event that we have been requested to do for several years.

In June we had an afternoons playing on the lawns at Snitterton Hall. 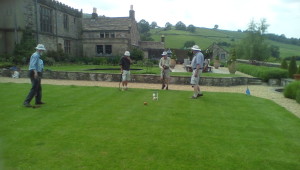 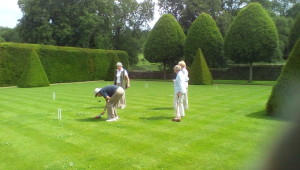 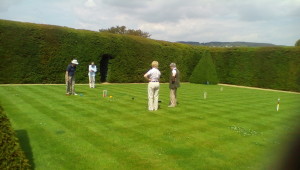 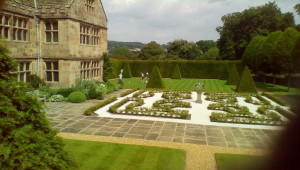 It will soon be the close of our playing season, but we shall continue until the weather and the state of the lawns prevents play.

In July several members took part in a ‘Sport for Children’ day at Carsington Water, the children and parents all enjoyed having a go! Click here to see more pictures.

Our club tournament in August had twenty-five members taking part. The croquet and excellent cakes were enjoyed in equal measure. The winners were Bill Robinson and Christine McMeeken.

In March 2015 we celebrate our ten-year anniversary.   It all came into being from a brain-wave of Alan Reeves, who persuaded a few friends that croquet was what our lives were lacking. The DDDC allowed us a space in the recreation ground, a grant was successfully applied for to buy equipment, all that remained was to learn how to play.

There are now thirty-five members and four playing sessions a week. New friends have been made and new skills learned. THANK YOU ALAN!

Plans are in place for a celebratory meal at Bakewell Golf Club in March 2015. 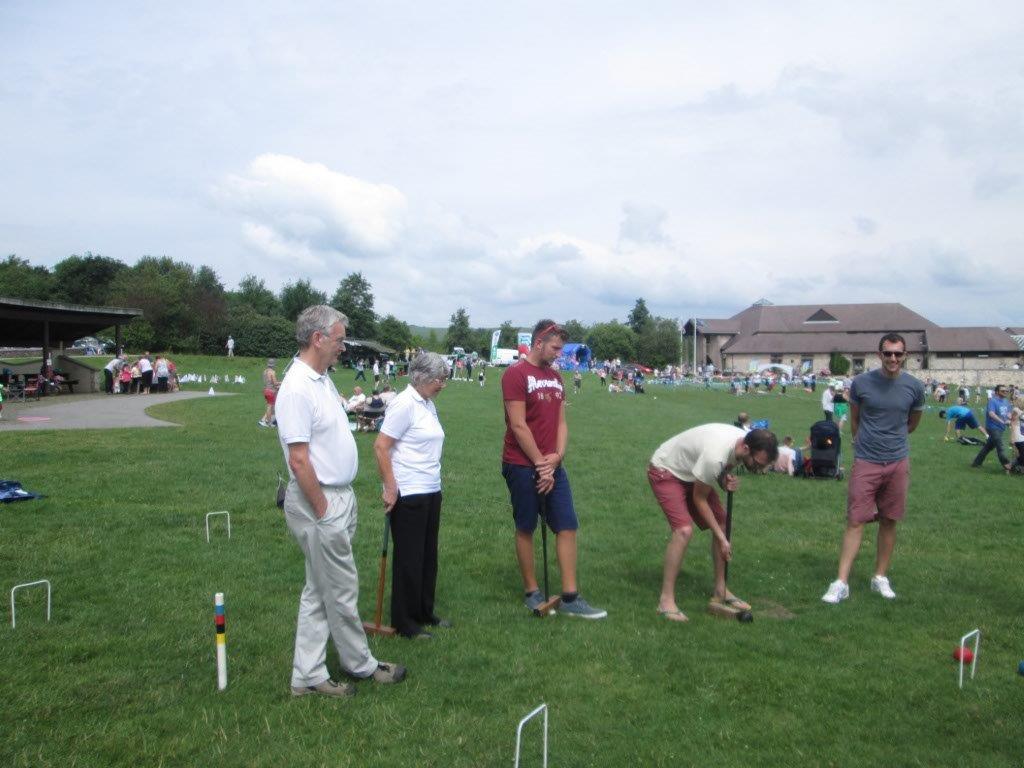 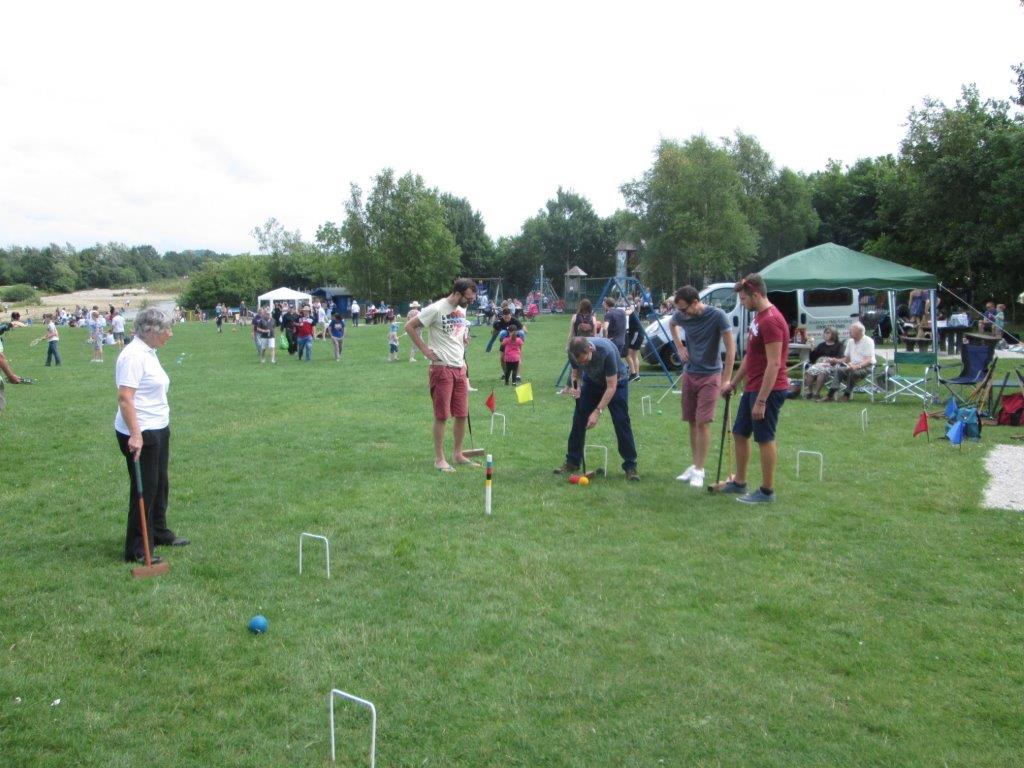 On the 18th July the Rotary Club held a Croquet afternoon and evening on Ashford-in-the-Water Cricket  Ground. The weather was sunny and warm and the cream teas and Pimms helped to create the perfect English idyll.

President Roz Adamson welcomed members of Rotary Clubs, friends family and local residents to be tutored in the art of croquet by players from Bakewell Croquet Club.  By the end of the event – whilst not fully skilled, most participants were able to weild a mean mallet!

Funds were being raised by the Rotary Club to support youth related activities and awards.

Twelve members visited Snitterton Hall, Matlock for an afternoon playing on their croquet lawns.  An excellent day, enjoyed by all who played and it is hoped that we can arrange a similar event next year. 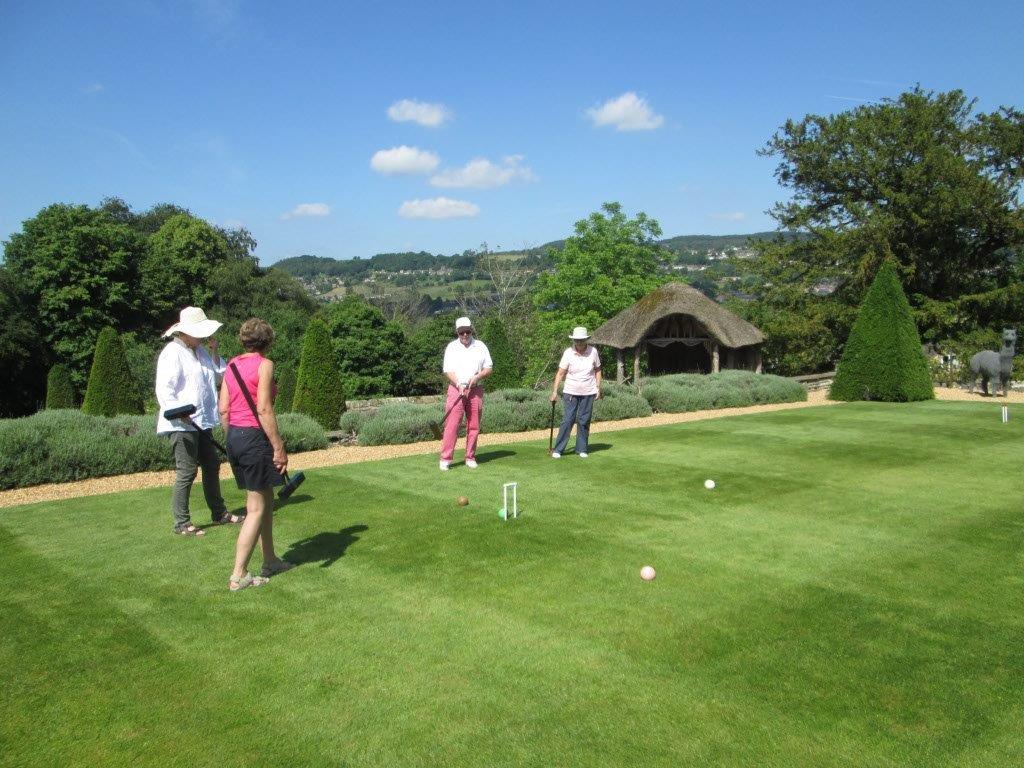 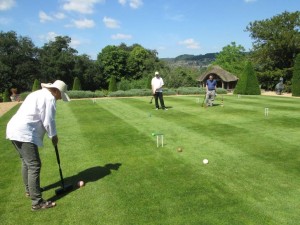 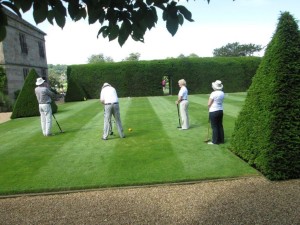